Ever wonder where Dakin’s Solution, the wound care solution, got its name? The history of Dakin’s Solution can be traced back to the man it is named after, Dr. Henry Dakin.

During the time of Dakin’s development, the treatment of wounds, war injuries, surgery incisions and health condition-related sores and wounds was problematic for patients in need. One man helped change that by introducing the world to a revolutionary product.

Here’s a brief history of Henry Dakin and the wound care solution he changed the medical field with. 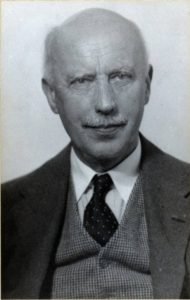 Born in London on March 12, 1880, Henry Dakin took an interest in biochemistry early on. During an apprenticeship as an analyst for the city of Leeds he learned to analyze the city’s gas works and water. This experience inspired Dakin to further his studies at Leeds University, earning his Doctor of Science degree in 1909.

Joining the Herter Laboratory in New York in 1905, much of Dr. Dakin’s work and interest was performing studies enzymes and amino acid metabolism, making significant contributions to a field that was still very young.

Some of his noteworthy discoveries in the field include discovering and studying the properties of the enzyme glyoxalase, the racemizing effect of alkali on proteins and new methods of separating amino acids.

World War I and the development of Dakin’s Solution

The assassination of Archduke Franz Ferdinand of Austria on June 28, 1914 was the spark that kicked off World War I, one of the most unforgiving wars ever waged.

Because of the conditions most battles took place in and the current state of battlefield medicine, history shows that the greatest killer on World War I battlefields was not bullets, shrapnel, explosions or blades, but infection and disease.

The wounds suffered during trench warfare were a combination of deep tissue damage, embedded debris, mud, dirt and human waste – the perfect cocktail for causing gangrene and other horrendous infections.

Dr. Dakin, along with his colleague Dr. Alexis Carrel, a prominent French surgeon, saw the need to help the soldiers who were battling these infections. They wanted a solution that did not irritate skin yet had enough bactericidal power to kill microbes present in wounds both on the battlefield and in the hospitals that were treating soldiers.

In 1916, this need drove Dr. Dakin to the development of what we now call Dakin’s Solution. The solution became a cornerstone of Carrel’s surgery technique. Carrel performed clinical observations on the effectiveness of the solution and technique; he performed quantitative bacterial examination, measuring time for wound closure, decrease in amputations, and diminution in length of treatment.

He even went on the make the claim that by using Dakin’s Solution ‘‘… it has been possible to prevent, in the greater number of cases, infection of wounds and to abolish, almost entirely, suppuration in hospitals.”[1]

Used throughout World War I and the rest of the 20th Century, Dakin’s Solution was an inexpensive solution against a wide spectrum of aerobic and anerobic organisms, but due to a short, two-day shelf life it was never available commercially.

That was until 1982, when building off the initial vision of Dr. Dakin, Ross Deardorff assembled a team at Century Pharmaceuticals to improve upon the original formula, buffering it to make it more stable, non-cytotoxic, and less irritable to the skin, depending on the strength. Through years of testing and improvements they found methods to extend the shelf life of Dakin’s Solution from a mere two days to up to two years, depending on the strength.

This facilitated commercial availability of Dakin’s Solution, allowing the cost-effective and infection-fighting wound care solution to be used not just by hospitals, but also over the counter for patients recovering at home.

The adjustments to Dr. Dakin’s original formula lead to the unconventional naming conventions we have today. His original strength had Sodium Hypochlorite 0.50%. When Century Pharmaceuticals further buffered and diluted Dakin’s Solution it led to a situation where Sodium Hypochlorite 0.25%  was considered “Half Strength” of the full 0.50%, instead of calling it “Quarter Stregnth” based on the number alone.